How old do you think you will be when you die? 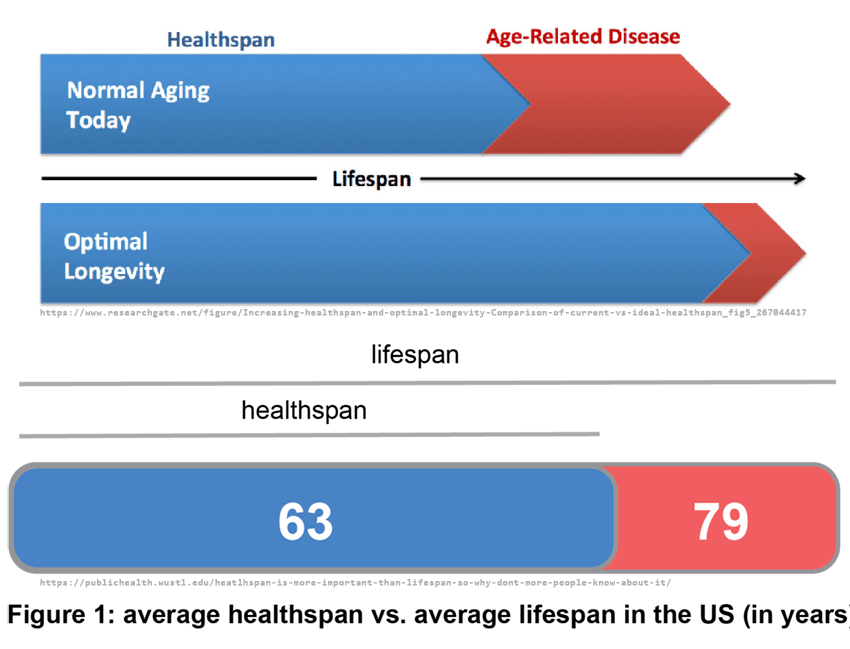 If I were to have asked that question a few hundred years ago, someone might have answered, “35!” and have been happy about it. In fact, up until the 1800’s, the average life expectancy was somewhere between 30 and 40 years of age.

Since then, we’ve come a long way in terms of personal hygiene, sanitation, better health care, clean running water, immunizations, and better nutrition. These improvements have led to a dramatic increase in average life expectancy, which stands around 75 years in the modern industrialized world.

With our newfound long lifespans, we’re now starting to talk about extending our healthspans.

What is a “healthspan,” you ask? This is the period of our lives that we spend in relatively good health, without having to deal with chronic diseases, like heart disease, lung cancer, stroke, and Alzheimer’s to name a few.

Currently in the US, we have an average lifespan of about 79 years, but a healthspan of only about 63 years. That means the average person spends the last 20% of their life battling chronic diseases.

As our Baby Boomer population ages, it is expected that by the year 2060 the number of people over the age of 65 will more than double current figures, outnumbering children for the first time in our history, and creating a condition that’s being called, “the Silver Tsunami.”

Given that information, in the coming years you might expect healthcare costs to skyrocket even higher than they are now as that huge segment of our population starts their personal skirmish with debilitating diseases – and you would be correct.

But, not for everyone. You see, there are two kinds of people: People that ignore their health and hope for the best, and those who are active participants in their health.

For the latter group, they can expect to be pretty darned healthy right up until their eventual death. They’re not likely to go broke sparring with disease after disease.

There’s a joke meme going around the internet that reads something to the effect of, “Look at all of these people eating healthy and exercising, just to eventually die of nothing.”

While it may be true that we will all eventually die, not having to spend money wrestling with heart disease in the interim is a good thing in my book.

The other consideration is the fact that medical technology keeps advancing, which will keep pushing that life expectancy higher.

In the US in 1919, our life expectancy was only 56. In the hundred years since then, we’ve added 23 years onto our lives!

It’s been theorized that with medical enhancements, we could push our life expectancy into the 120’s and beyond. Some medical scientists are even working on slowing and reversing the aging process, which could make people live indefinitely.

But what good is a longer life if it comes with frailty and disease?

The good news is that there are two things that you can start doing right now to extend your personal healthspan: Properly nourish yourself, and exercise.

Your health begins where your fork ends.

Are you ready to get started?